Welcome in Bergen aan Zee !
Order your own Freebee Map

Bergen aan Zee is a seaside village in the municipality of Bergen, the resort is located directly on the North Sea coast and has about 470 residents.
The village is quite young; The village was created by a vision of large landowner and Lord of Bergen, Mayor Jacob van Reenen He left in 1905 to build the Seaway designed by the famous landscape architect Springer and began the construction of Cafe Prince Maurice.
Also mayoress Maria van Reenen-Völter strained for the development of the resort. Through its published book in which she described the attractiveness of Bergen, many artists settled in Bergen. She also made sure that was pulled from the Bergen a tram line in 1909 to Bergen aan Zee. This was a direct train from Amsterdam to Bergen. There was, by private initiative a completely new village in 1906.
Bergen aan Zee paid parking from 1 March to 1 October.
There is one entrance to Bergen aan Zee, this can cause traffic jams on busy days. 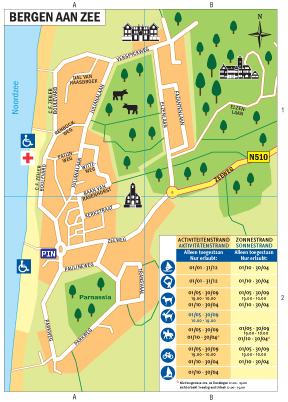 Here you will find information about Bergen aan Zee: