Welcome in Enkhuizen !
Order your own Freebee Map

Enkhuizen is a city and municipality in the West Friesland region. The municipality is located on both Markermeer and Ijsselmeer. Enkhuizen is known as the "herring city" because of its past as a center for herring fishing. The city is, among other things because of the water sports, an important tourist center. In addition, the town has internationally renowned seed companies and horticulture, as well as a plastic industry cluster.

Enkhuizen was one of the most prosperous cities in the Netherlands in the 17th century. As a member of the VOC, the city gained power and influence. The rich history of Enkhuizen is still visible when you walk through the old town with many mansions, canals, churches, city walls and harbors. 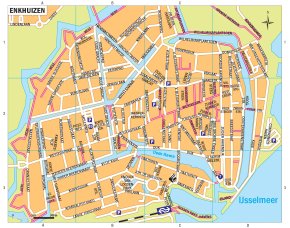 Here you will find information about Callantsoog:

- How do I reach the city

With the directions on this page you can prepare your trip.