Welcome in Den Haag !
Order your own Freebee Map 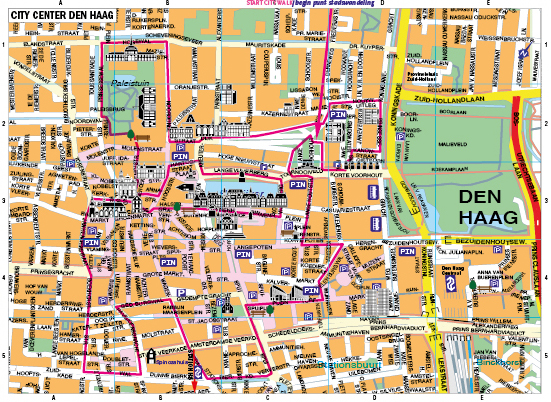 You can also follow this route of our city walk with your mobile phone, and then see the explanation of all monuments in your language on the mobile.

The tour starts at the Escher in het Paleis Museum (1), housed in the former palace of Queen Regent Emma. The route follows the Lange Voorhout, cross diagonally and enjoy coffee with pie in the political en literere Sittingroom of The Haque, Bodega De Posthoorn (24). Follow your way via Tournooiveld, to the Lange Houtstraat. You will pass the Plein square, with its large statue of Willem van Oranje. Cross. Here you will also find the Mauritshuis, the starting place for a city walk with a guide offered by Free Walking Tour (31). Follow the pink line to the wijnhaven and the Turfmarkt.

From here, enter the city hall of The Hague known as The Ice Palace  with its impressive Atrium. You walk across the Spui towards the bierkade to a pleasant part of The Hague. Follow the pink line to the dunne bierkade to Rabbijn Maarseplein where you walk around  the square on to the pavaljoensgracht

Via de zuidwal you now arrive in the Boekhorststraat where you will find an authentic shopping street. Follow your route Boekhorststraat and the Jan Hendrikstraat which later becomes the Torenstraat. You then turn right and see the large Sint Jacobskerk . You continue around the church to the Dagelijkse Groenmarkt, the site of the Oude Stadhuis. This town hall consists of two different elements; the first was built in 1565 while the extension at the front was added in 1733. From here, the route takes you towards the Buitenhof   . From the Buitenhof pass through the gateway into the Binnenhof. For centuries, the Binnenhof has been the very centre of Dutch politics. One of the buildings on the Binnenhof is  the Hall of Knights that dates back to the 13th century. The Ridderzaal is a listed monument and at one point in its history was used as the meeting hall for the Upper House of the Dutch Parliament. Next to the Binnenhof is the Hofvijver. From here you have an excellent view on the “torentje”  tower which since 1982 has housed the offices and workroom of the Dutch Prime Minister. After walking around the Hofvijver and through the shopping streets, you will pass along the Papestraat as far as the Oude Molstraat. Continue towards the Paleistuin gardens;  if you ring the bell at the last door on the left you may be granted access to the palace gardens. These are certainly worth a visit. The Paleistuin gardens are in fact a park that fills the space between the Noordeinde Palace and the Prinsessewal. The gardens date back to 1649 and continue as far as the Royal Stables. After the Hogewal, turn left onto the Zeestraat which houses the Panorama Mesdag (3).  ‘Step into the Netherlands’ largest painting’. From here walk back down the Zeestraat which becomes the Noordeinde. This street is home to a number of historically authentic courtyards.. Via the Hartogstraat and Lange Voorhout, you walk towards the Houtweg, you will end up on the Prinsessegracht, the site of the Meermanno museum (52), the world’s oldest book museum. On the opposite side you see the Malieveld paviljoen (17). This paviljoen stood on the beach of Scheveningen and was moved to The Hague by Royal Decree in the time of Queen Emma. Follow the route to Museum Escher (1), and you will soon find yourself back at the starting point of the tour.