Welcome in Medemblik !
Order your own Freebee Map 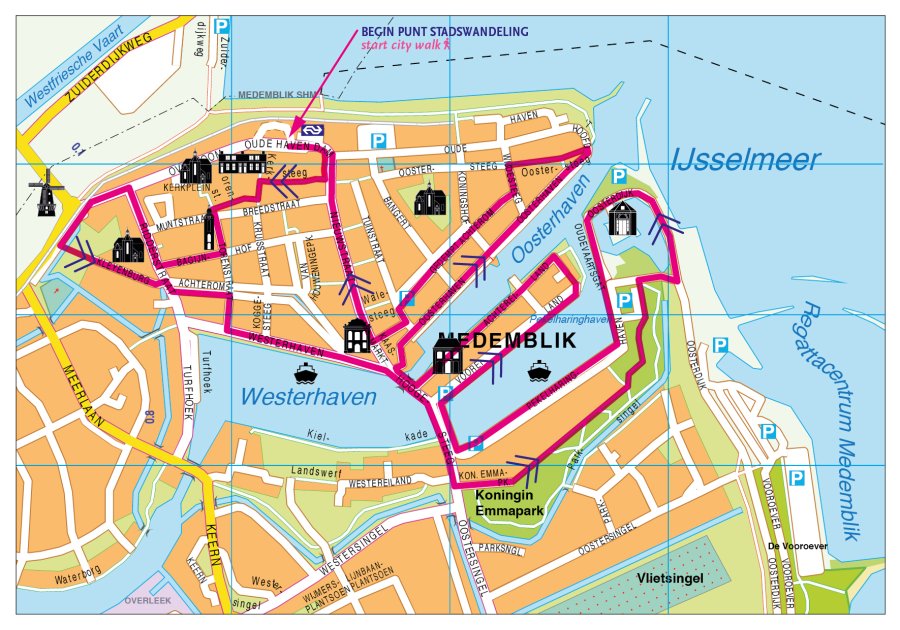 You start the walking route at the Medemblik Station and also the end station of the Hoorn-Medemblik steam train.You will pass directly by the bakery museum here you can see how the bakers made their wares. You then walk past the widow houses, widows lived here whose husband did not return from the sea. The orphanage gate is part of the former orphanage, The first church you encounter is the Boniface church,  built in 1404 and rebuilt after a fire in 1555. It is a late Gothic hall church with two naves. You then walk past the RK Martinuskerk, from 1903 and then you come to the Meelmolen,  a rebuilt 17th century oil mill. You continue your route to the Westerhaven, where the wall along the harbor used to offer protection against the Zuiderzee. After this you arrive at Castle Radboud, a castle from the 13th century built by Count Floris V. This castle used as barracks served as an army base against rebellious West Frisians. Noble families never lived there. The castle is therefore simply furnished. You then walk along the Pekelharinghaven, from which the VOC conducted its trade. On the Vooreiland nr 2 there is a white house, built by a cheese trader in 1862 who wanted to become mayor of the city. You will then pass the Synagogue, Early in the 18th century the first Jews settled in Medemblik. This Synagogue dates from 1808. Many Jews were forced to move to Amsterdam in WW2. At the Kaasmarkt you will see the Kaaswaag, This waag dating from 1692 was the replacement of the old waag opposite the Boniface church from the 14th century. In the shopping street De Nieuwstraat you will find many old buildings such as number 58, number 26 from 1613 and many others. You will now arrive at the station at the end of the walking route.